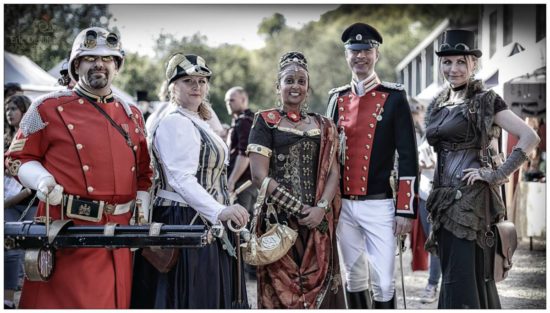 The start of the schools in the Grand-Duchy in the middle of September also brings a return to the normal routines of work and less play. The summer holidays are over and you can definitely tell this by the longer commutes in the morning and the densely populated streets. However not all is gloom and doom!

The end of September also brings Luxembourg’s Steampunk Convention that takes place on Saturday and Sunday (28th-29th Sep) at the breath-taking Fond-de-Gras. The Fond-de-Gras is a truly magical sight that is home to the ‘Train 1900’ which has a collection of much older trains and steam-engines. It is a true sight to behold set in the middle of a large, green forest and located in the ‘deep’ south of the Grand Duchy, close to Pétange and the French frontier (however not that hard to get too, just take the train from Lux gare and you are there in no time!).

‘Steampunk is a subgenre of science fiction or science fantasy that incorporates technology and aesthetic designs inspired by 19th-century industrial steam-powered machinery. Although its literary origins are sometimes associated with the cyberpunk genre steampunk works are often set in an alternative history of the 19th century’s British Victorian era or American “Wild West”, in a future during which steam power has maintained mainstream usage.

The weather promises to be ‘good’ according to the weather forecast but then it might also be a little bit chilly. Starts both days @ 11am.
Street entertainment, concerts, victorian market, exhibition of steampunk creations together with historic steam trains— what’s not to like?! Obviously best enjoyed if you also dress up.