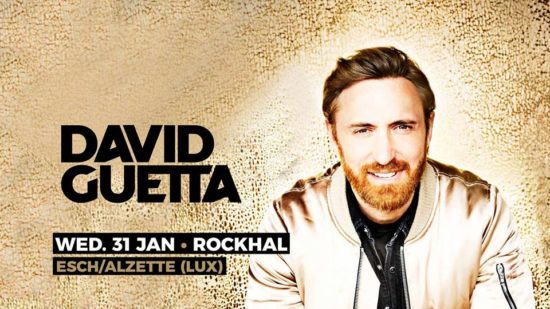 Many top music artists make a stopver in Luxembourg and at the end of Janary none other than French DJ Guru and music trendsetter David Guetta, the man himself, will be in town. Tickets have been on sale for a while now and are nearly sold out but there is still a change of getting a few ticks here.

David has established himself as one of the world’s biggest and most successful DJ by fusing dance music with urban artists. By teaming up with some of the biggest names in hip hop and R&B, David reinvented their sound for the electronic dancefloors and cerate a new pop alchemy. Hits such as ‘I Gotta Feeling’ with the Black Eyed Peas, ‘When Love Takes Over’ with Kelly Rowland and ‘Sexy Bitch’ with Akon have not only propelled him to superstardom but they also set a new template for the sound of commercial radio music.

With a new album in the works there might be a chance that David will sample his latest tunes and see how the crowd reacts. Get some energy after a long dull start into the week with this Top DJ #nottobemissed